The tour left TW-TH at local market around dinner time. Now they had to figure out what is edible for their palate! TW is a proud carnivore and so she was (over)confident that she would eat anything comfortably, it was just TH who had to find food palatable to him. But, a visit to South East Asia [first KL and then Siem Reap] robbed TW of her pride. She has never been a fussy eater, but the aroma and flavour of South Asian food viz. Nasi Lemak, Nasi Dagang and the likes are beyond the sensory limits of TW. Cambodia was no different, where there were abundant non vegetarian options on road-side eateries. But the options were fried animals in their original form, such as rodents, snakes, dry fish, and frogs. TW could not find the courage to eat those and now she stands completely humbled by her palate’s limitations. After running out of their options, TW and TH did the most unthinkable and went into a restaurant serving Indian food! This would be the first time ever, in the history of their travels that TW and TH were happy to see an Indian restaurant and ate a hearty Punjabi meal in foreign land! To their utter surprise, the Indian restaurant was packed with locals savouring Indian Naans and paneer masala! What a strange world we live in!

Post dinner, TW and TH walked through the old market areas of Siem Reap. The night market was just being set up around 8.30pm! It had the stalls of all the touristy things and so was not new to their Indian eyes. You will find the same things in all souvenir shops be it Rajasthan, Goa or Kerala. The night stroll was comfortable and the bridges over Siem Reap River come alive at night with live musicians and some enthusiast dancers. You can walk back safely to your hotel even through dark by lanes. After an exhausting night at the airport, a day full of sightseeing and a hearty meal, it was time to hit the sack; when TW saw a lizard on the wall behind their bed. Saying that TW is scared of the lizards is an understatement! Hence, TH informed the hotel manager to get rid of the lizard. And the lady calmly replied, they are everywhere and nothing can be done! She was right; there were lizards of all sizes everywhere. Tiny ones on the floor, medium ones around the doors and big ones near the lights. So with no rescue in sight, TW slept dreaming of those little monsters eating her alive.

The next day was reserved for the visit to the dream destination – Angkor Wat complex. TH had earlier booked early morning Tuk Tuk to take us to Angkor Wat as the complex opens at 0500 hours. But realising that with Day 1 being so hectic, the time was changed to 0900 hours. Breakfast was included in our package, but the hotel being more of a home stay, the manager lady had taken our breakfast preferences and time, the earlier night itself. So the breakfast was a quick affair. They headed to Angkor Wat with same Tuk Tuk driver who moonlighted as their guide. The ticket counters for Angkor Wat are located right outside Siem Reap town and the tickets are available for 1 day, 3 days and 7 days options. Being on a tight schedule, they obviously purchased the 1 day pass and made their way to the temple complex. The roads leading to Angkor Wat are well maintained and it is quite apparent that the tourism value of Angkor Wat for Cambodia is quite high. Their driver had his own idea of how they should begin their visit to temple complex so he decided to do the reverse circuit. Angkor Wat is an experience of a lifetime. If one looks at it as a mere temple complex, that’s all you will find. But if you spend enough time here, you will see that rise and fall of amazing civilizations is the order of the universe. If something as advanced, beautiful and extravagant can crumble to pieces, human existence is but mere speck of dust. 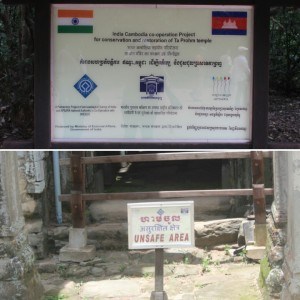 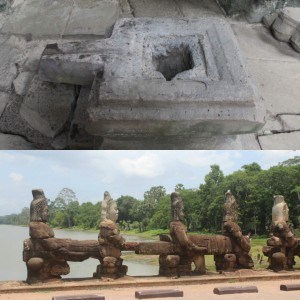 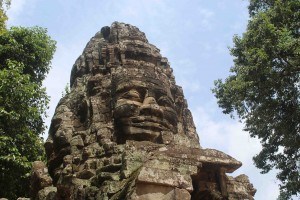 Angkor Wat complex has many temples dedicated to different Hindu deities including Shakti, Shiva, Vishnu. Now majority of them are converted into Buddhist prayer places. But the bas-reliefs, stone sculptures depict the scenes from ancient Hindu scriptures. TW has always been awed by how far and wide Hindu civilisation had reached and how the ancient people were so advanced in geometry, architecture and everything scientific and artistic! They say that one day is not enough to finish looking at Angkor Wat and they are right. But the ordinary mortals had to make do with their limited time in that time warp and so TW and TH were back in town by lunch time to again try their luck with the chopper ride. They again got the same answer that they were the only 2 pax and they won’t fly unless there were atleast 3. So TW and TH made peace with their destiny and proceeded for lunch. While TW and TH were busy re-hydrating themselves, they got a call from the chopper company saying they had found 2 more pax and they would be flying at 1530hrs. It was 1425hrs already and it took superhuman efforts to dash back to the airport in the terrific heat after having settled in the air conditioned room.

TW and TH reached the airport around 1505 hrs and were waiting for the pilot and co-pax to arrive, when the Weather God decided to show its might! Right in front of their eyes, the clouds started gathering and sucking out water from the nearby lake and make its way towards the airport. TH has been heart-broken multiple times in past with respect to chopper rides and he probably thought this was also gonna be another one. So he went in his deep shell. He was clicking some pictures to divert his mind and within next 5mins we had torrential downpour. The pilot, TH and TW waited in the tin shade as the rain poured outside when the pilot mentioned that we will wait for 10mins to see if rain abates. They were the longest 10mins when am sure TW and TH both prayed to their respective gods. So their prayers were answered and the weather did clear by 1530 and they did take off for real FINALLY J and once airborne, there was the most fantastic view of the rainbow behind the Angkor Wat complex. It is in moments like these; when nature shows its true power in its full glory that you realise you are so inconsequential! The ride lasted hardly 10mins but it showed an amazing view of city of Siem Reap, West Baray- an ancient manmade reservoir, Angkor Wat complex. The aerial view of Angkor Wat is purely breathtaking and you appreciate how perfectly geometrically aligned the entire complex is! TW and TH have realised over the years that the photos you see in travel magazine are mostly the aerial shots showing the entire landscape and once you go there on foot, you are in for disappointment because you have set your expectations as per those photos. So, TW and TH have decided to avail the chopper rides, whenever possible, to match the experience with the expectations 🙂 and it is worth it.

TW and TH had struck off all the items on their list, chopper ride being the highpoint of the trip. So it was time to let their hair down and enjoy the vibe of the town at Pub Street. It is refreshing to just stroll on the Pub Street. It is a melting pot of all travellers and offers some great food and drink options. There are some street vendors selling exotic snacks such as roasted scorpions, frogs, tarantula, and snakes on skewers. TW and TH almost lost their appetite looking at such fantastic food options! The vendors know that foreigners will not buy them but would want to click the photographs, so they have put up boards saying “Photographs 50 cents”. Quite smart people! 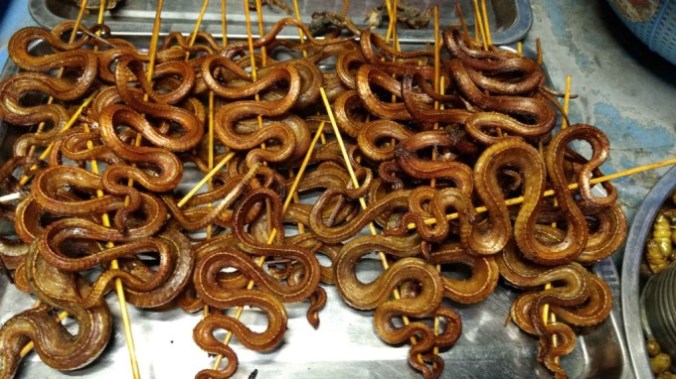 After strolling through the Pub Street, Night Market and the bridges, it was time to prepare to fly out of an unknown corner of the World. TW and TH are glad to be born in India! J _/\_ 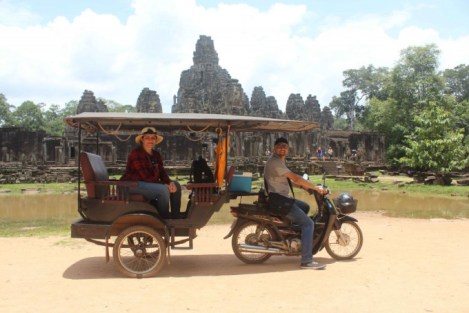