Boteco in Brazil means a place where alcoholic beverages were sold, serving as a meeting place for “Bohemians” who look for a good drink and cheap snacks. The restaurant Boteco in Koregaon Park Pune fulfils two of the three criteria’s and does not make you feel sorry for the place not being cheap.

We ended up on Boteco by chance. A busy day at work, hunger pangs and long traffic jams made us divert and look for a place to eat and then head home. Koregaon Park is hub of restaurants in general and fine dine in particular in Pune and a quick google search later we were at Boteco – for a simple reason that we had never had Brazilian food before.

The entrance is difficult to find; one goes to the basement (one level down) to take the lift to the third level. It was 1930hrs on a weekday evening and the smiling lady who greeted us was looking for possible table options. We wondered why but then this was soon answered when a steady stream of patrons, mostly expats kept walking in till the restaurant was full. We were seated next to the open kitchen in moderately lit closed section. We later came to know that the hotel also has a terrace section which was sold out that evening.

The Brazilian love for football is evident in the décor. Football, designer tiles with football murals and a large pictorial depiction of Christ the Redeemer from Rio de Janeiro are the first things we noticed about the place. The moderately dim lighting gives a good glow to this place.

We ordered for wine and chose Tapiche Pinot Grigio (Argentina) & Conosur Bicycle Chardonnay (Chile). Both were fabulous with nil residue and with aftertaste. We had such a wine after a very long time. The kitchen sent us an amuse bouche of arancini with a lovely smoked zucchini soup to kick things off. We ordered the Mediterranean platter – freshly baked breads with dips and the breads were as fresh as one could get anywhere. The dips adding to the taste.

For food we ordered Galinhada – Traditional Brazilian mixed rice with lightly spiced chicken and Chicken Churrasqueira. The chicken dish was tender juicy chicken pieces from charcoal grill served with some tomato slices and we thoroughly enjoyed it. However, the Galinhada was not something we enjoyed. I felt it was smelly and was not going down well for me which we pointed out to the staff, who kindly removed the dish and offered to replace it with something else. We instead opted to have two desserts instead of one to cover up for the hunger. Even when we insisted, the team did not add the cost of this dish to our bill. 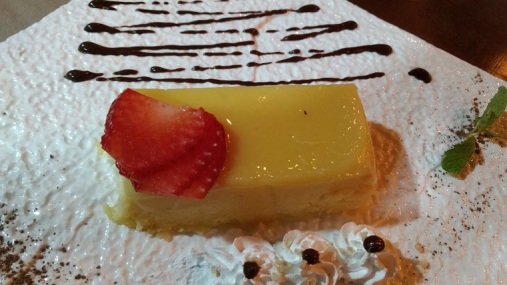 Chef Guto Souza was in element as he juggled between the different stations and alternated that with a round of the guest tables. It was impressive to see him write down the feedback we have as part of his notes and push it into his bag to review later. An exemplary quality hardly matched by others.

Sitting next to the open kitchen also meant that we could see what was flying off the cooking stations the most and it was everything on the grill which was coming out of the kitchen. We thoroughly enjoyed this new cuisine and would recommend people to try Brazilian food once a while.