When we planned our Vietnam-Laos trip last year, I did not even know that there exists a nation called Laos; let alone the cities in that dot sized country. When TH (The Husband) was contemplating whether to go to Vientiane or Luang Prabang (popularly known as LP), I was just excited about our next adventure not knowing where we would eventually land. TH did some research and finalized that we will fly to Luang Prabang from Hanoi and will stay there for 1.5 days.
Laos offers Visa on Arrival for Indians which is a huge relief and privilege as very few countries have this on offer for us. We landed in LP around 8pm from Hanoi  (The tale of rarest tail yet – Lao Airlines). The airport staff seemed anxious to get us out of there. As soon as our aircraft docked, the runway lights were switched off and only a small part of airport remained lit up. The immigration experience was like never before.  A board was put up for visa fees applicable to arriving passengers depending on their country. Extra 2 dollars were “officially” charged since we arrived later than 4pm. The officials were practically screaming at passengers to hurry up which made all of us scramble to put together the documents. We were the first in the queue and our passports and immigration forms were snatched from our hands. Passport was stamped in a jiffy and we were in luggage belt area before we knew it. Luggage was brought in by tractors with equal swiftness. We landed, disembarked, got visa stamped, cleared immigration, collected luggage all under 15mins!!
The immigration staff was probably forced to wait, the Customs staff had already left for the day and we walked out of the terminal without any customs formality.
There was a lone sim card shop open to cater to this last flight of the day. And we got an amazing deal on data pack. Why we needed that for 1.5 days in LP remains unanswered :p We had called for a pick up from our hotel “Sala Prabang” and a large Toyota van was waiting to receive us. 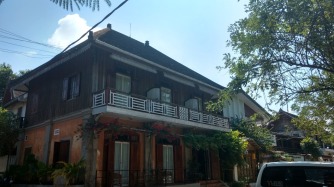 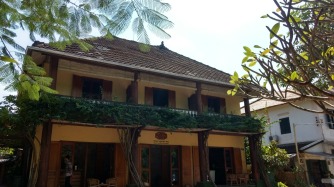 Sala Prabang Hotel
While en route to our hotel we caught a glimpse LP’s famous night market. Apart from one street, entire town was dark and asleep already.  We were staying on the banks of river Mekong – the longest river in Southeast Asia. Our street was adjacent to the night market street and we could feel the vibe of that market. LP is a designated UNESCO World Heritage Site since 1995. The town is barely the size of a suburb in my town and is quaint and somnolent.

LP has caught up with being a perfect tourist spot and there are many restaurants catering to all tastes. We had selected a hotel facing Mekong River as our Laotian abode. TH is somehow in love with Mekong. Its vast expanse of muddy waters was a constant reminder of how infinitesimal importance our existence has. The water appeared calm but the erosion on the river bank was the evidence that during monsoon the same river would turn fierce.

Our hotel was located on one side of the road whereas its restaurant was on the other side alongside riverbank. It was mandatory to be barefoot within the hotel premise. This came as a pleasant surprise. Our breakfast spot was picture-perfect under the shade of a large tree overlooking a jetty. Breakfast was a simple affair with lot of fruits on offer. In both our breakfasts we relished some Laotian mangoes, Chinese figs, and some other unknown but tasty fruits. 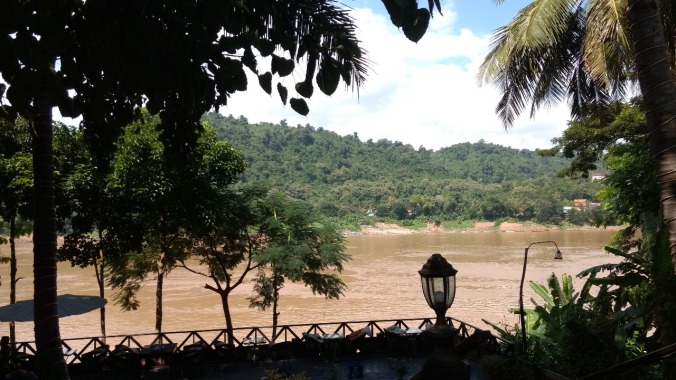 The first morning in LP was earmarked for the much anticipated visit to Kuang-Si waterfalls. You can read more about it on Serene Scenes of Kuang Si . We dedicated half day for this marvel and then explored the town of LP.
The restaurants on main market street are a mix of variety of cuisines including continental. A quick search on TripAdvisor led us to a small bistro run by a French lady. We got some amazingly fresh and super-tasty food there. But service was excruciatingly slow and we had half a mind to walk off. In retrospect I think our impatience may be largely attributable to our life in the fast-lane. No-one in Laos seemed to mind the slow pace of life. There are some good bakeries in the town and one can enjoy a cuppa while doing nothing. 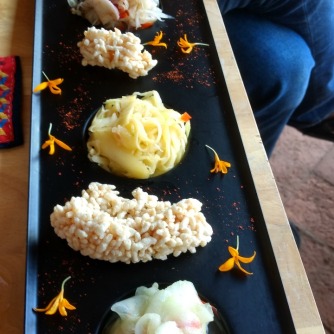 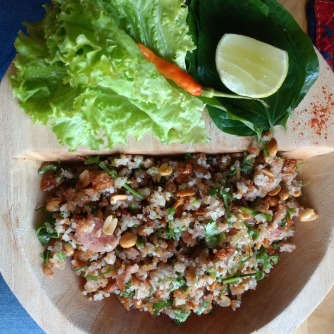 Burger
Sidenote: “Doing nothing” or as Italians would lovingly say “La Dolce Far Niente” is an extremely difficult thing, especially when there is nothing much happening around to keep your mind engaged. So Laos is not for those who demand action.

As we approached dusk, the town got busier. May be all the tourists had returned from their day long activities. The shops were being set up for the night market. The night market is an assortment of many things on offer from souvenirs to clothes, from food to some herbal medicines. Though the attention-catcher was a stall selling bottled rice wine with snake bodies floating in it. Our earlier trip to Cambodia had prepared us to expect such outlandish display of bizarre food items. So we resisted recoiling at the sight of this reptile infused concoction. But I still have a hard time wrapping my head around the fact that such things are consumed across the world! 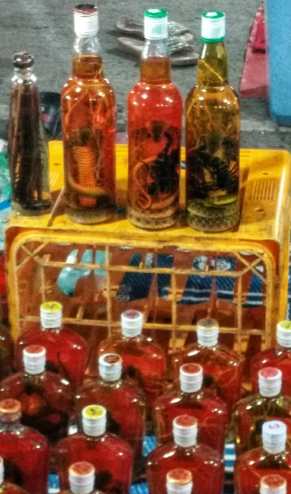 We purchased our customary fridge magnet and moved on to find some conventional food. TH ordered a chicken dish and I settled for Steamed Mekong Fish and sticky rice. The fish was fresh and delicious. The main street of LP is a complete contrast to the rest of the town which was dark and soundless. LP seemed like a safe place for tourists without any immediate threats of pickpockets or duping. Laotian people are almost like their Cambodian counterparts – very modest and soft-spoken. After a stroll through the noisy aisles of night market and also through quiet lanes not so far away, we retired for night since there wasn’t much left to do. 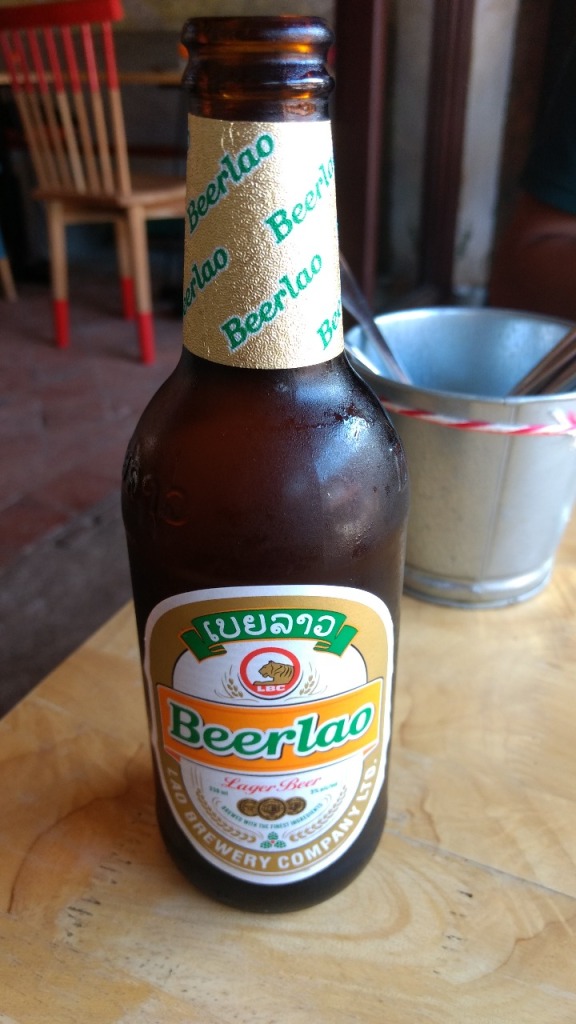 Trip to Laos is incomplete without “Beer Lao” 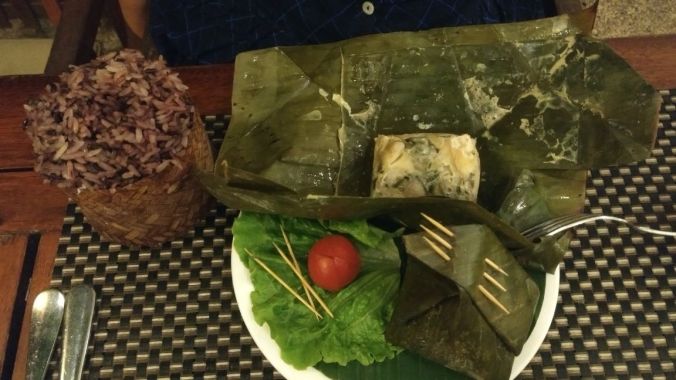 We had till lunch time on our last day in LP, so we decided to explore the town a bit further. There is also an option of boating in Mekong but it wasn’t an appealing route so we skipped that part. We visited a Wat which was much like the Wats /temples in Cambodia and wrapped our stay in this unpretentious town . Overall, Laos seemed like a younger sibling of Cambodia. If I can ever afford a sabbatical, LP and Siem Reap is where you will find me .. 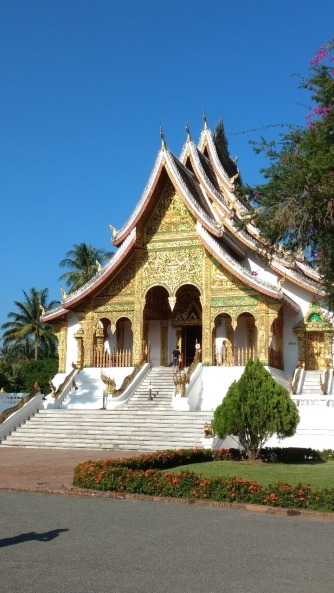 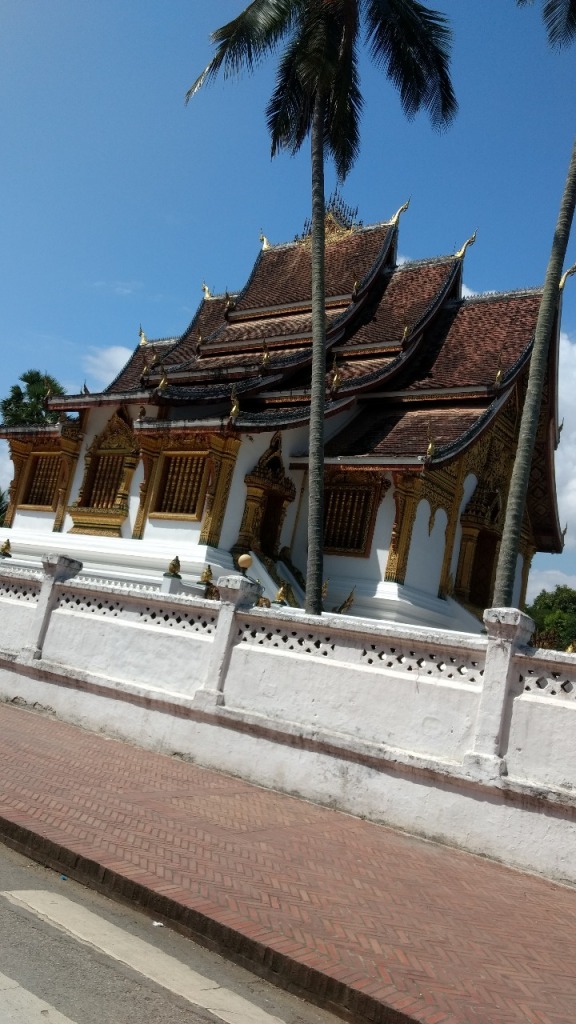 Footnote: Laos being an erstwhile French colony seems to have adopted the quirks of French language and hence is pronounced as LAO and “S” is silent.😉😉

2 thoughts on “Laos: Where time stands still and Mekong rushes past”