Why, Where, What, is there really a need to go there? The reaction we got was same from anyone whom we told we are going to Central Asia! Twenty-five years after the fall of Soviet Union, even Russia has warmed up to tourism but there remains an enigma about the “Stans” of central Asia. Our experiences in each city have been well documented by TW (The Wife) [Read: The Hospitable Steppes – Uzbekistan]– and a widely read blog post tells you how we visited Kazakhstan in $1.

“Kazakhstan till Nazarbayev is in power and Uzbekistan because Karimov is no more in power” – my reasoning always fell on deaf years. Most (including TW) did not know where Kazakhstan is on the map, it was futile to explain about the local politics.

With visas pasted on passports before departure from Delhi, we reached Tashkent via Almaty. TW had the (dis)pleasure of listening to my commentary on Tashkent while landing. Size of the city, its status of 4th largest city in USSR, 1966 earthquake and rebuildingand so on.

As we deplaned in the shiny new terminal, we followed the “arrivals” signage like all other passengers only to find the doors locked. No matter the time invested in research about Uzbekistan, we were not prepared for this! We were guided through the departures section which got us to immigration. Modern booths, manned by officers in crisp uniform with staff around to re-direct passengers to faster queues. A quick look at the passport, visa, our face and a stamp – we were through! Bags were out in less than 30 minutes and we headed out via green channel. If there is something that the new glitzy terminal lacks, it is the currency exchange counters. The internet is flooded with horrifying stories about Tashkent airport and our experience was anything but that.

The ride to Hotel Uzbekistan – where we stayed for the next 5 days, gave us a glimpse of Soviet planning. Wide tree lined boulevards, walkways, little traffic, marked road crossings and police at regular intervals.

Check-in was smooth. Reservation found in their system, passports kept at the reception for registration and we made our way to the room on 11th floor. We were welcomed with the sight of mattresses in the lobby, smell of wet paint and sound of hammering. As we entered the room we noticed the balcony door was open and it wouldn’t close. The air conditioner wasn’t working and the room smelled of paint. There are enough reviews online which ask people to avoid this soviet era hotel and all the fears of staying at this hotel were coming true. We called the reception and informed them about the situation. “The master will come” is all we heard on the call before the reception staff disconnected. Ten minutes of wait and the master was nowhere to be seen! At reception again with our bags and room keys, it took some persistence to get the room changed. This time on the 13th floor and the smaller room more than compensated with a better view – that of the Amir Timur square. 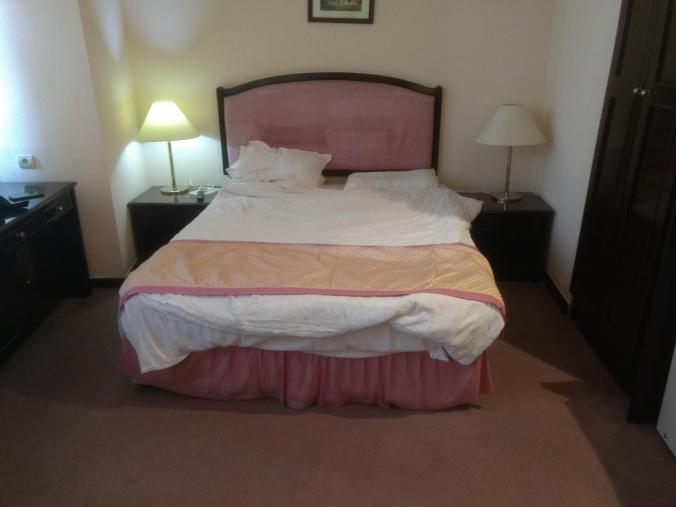 We were back in the lobby to look for some food options. The soviet era hotel advertises four restaurants, three of which were to be open 24 hours but all that was on offer was water, tea, coffee, cold drinks, chips, biscuits and muffins in a café. The rest were closed. The passports were ready at the reception with the registration slip which had the check-in date written on it. The slip would be stamped at check-out and rules mandate that you have to justify each night of stay in Uzbekistan with a registration slip and another hotel won’t allow you to check-in till you provide check-out from the previous hotel. This new information set alarm bells ringing. 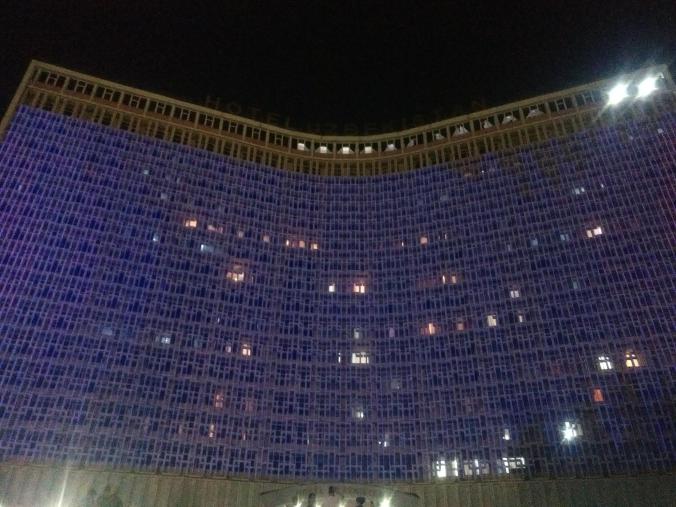 The hotel turns into country’s biggest TV in the evening

We had booked a hotel in Samarkand and planned to stay there for a night before flying out the next morning. We intended to not leave Hotel Uzbekistan and keep the luggage there to avoid carrying two bags. This rule clarity meant that we could not check-in at Samarkand, until we checked-out at Tashkent!

With no alternate flight and trains sold out, we booked a taxi and spent 5 hours on road to Tashkent from Samarkand. The dry desert type landscape is the closest we could get to Afghanistan. From Samarkand, Tashkent and Afghanistan border are equidistant, albeit on opposite sides. A five-hour journey in remote part of Uzbekistan with a driver who does not speak English is what we had dreaded when we decided to fly. However, now that we did not have an option, being Hindostani is what we relied on for our safety and it was the case. When we got pulled up at one of the check-plaza, a soviet concept, the driver was asked for documents, we weren’t! The driver showed his passport and other identity cards while we waited in the car. The 305km journey is interesting. The two cities were connected by straight road in soviet times but now there is Kazakhstan in between which leads to a detour!

If there is something which sets the country apart, then it’s the people. From tour guides who manage  tour schedules on whatsapp at any time of the day – to taxi drivers who tell about their past work on some listening posts monitoring American and Pakistani aircrafts, everybody is looking up to the opening up of tourism and return of tourism and trade on the silk road.