When the Principality of Monaco is termed as the home of the wealthiest and richest in the world, more often than not the reason being cited is that Monaco is a tax heaven. I wonder if these ultra rich folks would have been termed poor had they paid 30% of their income to the state! It’s the sun, sea and the high life of Monaco which attracts the rich and powerful of the world to Monaco.

Monaco is the second smallest country in the world, with an area of 2 square kilometres, world’s shortest coastline, a land border of little over 5 kilometres – all with France, is a few kilometres from Italy. The country is not part of EU but allows visa free access from the EU and has Euro as its currency in a special arrangement.

Last year when we planned a whirlwind tour of Europe covering multiple places in two weeks, Monaco became a destination of choice and our “budget traveler” tag meant that Nice was the choice of place to stay and not Monaco!

When we landed at Nice airport, I couldn’t get my eyes off the rows of private jets. The usual weekend gateway for the rich and famous in Europe and beyond, we landed on a Saturday with a trip to Monaco planned on Sunday!

Monaco primarily caters to the uber rich and the options to travel to Monaco from Nice include a private helicopter but also an option to go by a commuter bus or a train. We opted for the moderate one – express bus. TW (The Wife) is fluent in French but when the French are not clear with instructions, what can we do!

The hotel shuttle dropped us to Nice Airport Terminal 1 which has a direct bus to Monaco. The information board at the bus stop mentioned two ways of buying a ticket – at the counter in the arrivals section or with the bus driver. When the bus came, the driver insisted that there exists only one option – to buy at the counter! This meant we let go of the current bus, head to the counter to buy tickets and wait for the next one! To avoid this confusion again, we opted for a return ticket. The bus connects Nice to Menton- on the Italian border and passes via Monaco with stops at Place d’Arnes, Monte Carlo Casino and Larvotto Bay hotel.

With limited time and no interest in seeing the guards and guard changing ceremony we decided to skip the Place d’Arnes. We had our interests marked out – Monte Carlo Casino, Monaco harbour – where the F1 race starts, the famous hair pin on the F1 circuit near Hotel Fairmont, the exit of the tunnel and the tourism office for something special.

First stop for us was the tourism office. Monaco does not have border control when you travel by road and to the tourism office has a special stamp which they are happy to put on your passport which says you were in Monaco on that date. Passport stamped, a few maps picked up from the tourism office, we set walking to explore Monaco. 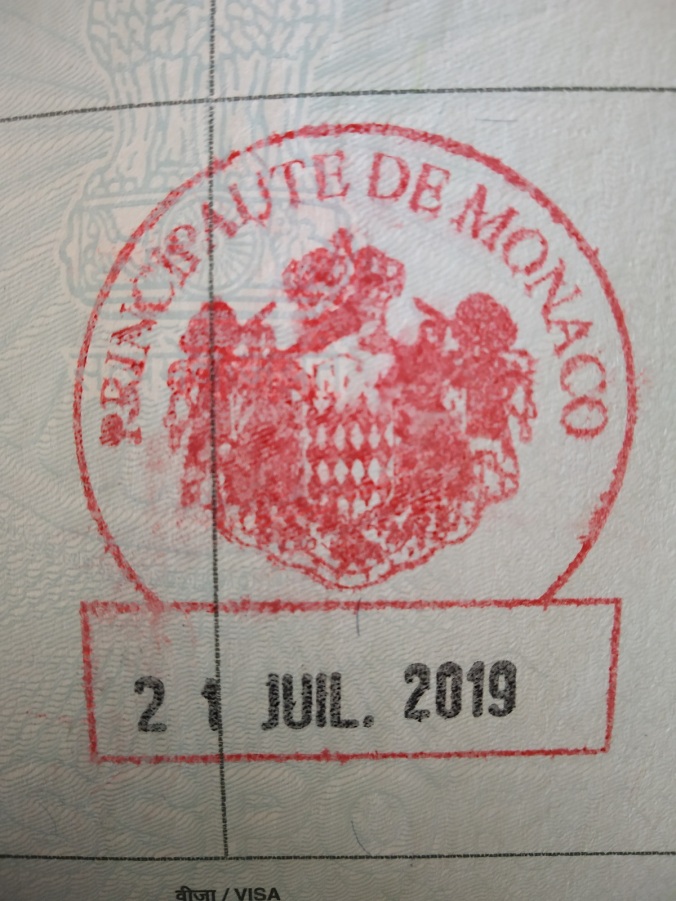 First stop was the casino. The most iconic place in Monaco forbids citizens of Monaco from entering! We knew we would also be barred from entering – not that we were citizens of Monaco but neither did we have the moolah nor were we suited enough to enter the place. A quick round of photos and we were off to our next destination aimlessly roaming around.

Monaco has lifts, escalators and travelators to help people navigate the terrain of Monaco – which is mountainous. Google maps more often than not failed to guide us well. We started walking towards the harbour navigating the streets relying on the sense of direction and not Google. The marvellous harbour, ships, cruise – mesmerizing! For long, what was seen each year during the F1 race on TV and seeing it in person – though not in as much grandeur, was still a sight to behold.

Next stop – Juan Manuel Fangio memorial at the Grand Prix circuit. The five time world champion had his memorial set up in 2003 near the entrance of the pit lane. The pit area as we know during the F1 race lies vacant at other times and some of this area acts an as open air park for kids and adults alike. We took a stroll on this road, looking at the harbour on one side and the buildings and stores on another. Heads turned frequently to see a Aston Martin or a Jaguar zoom by until we got used to that sight as well. 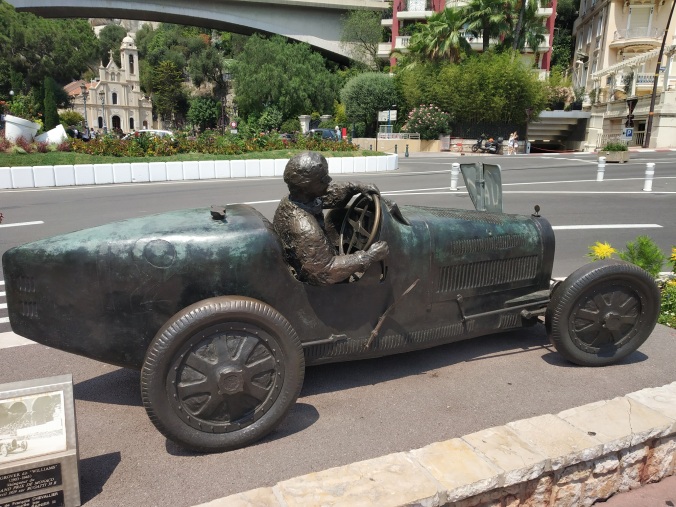 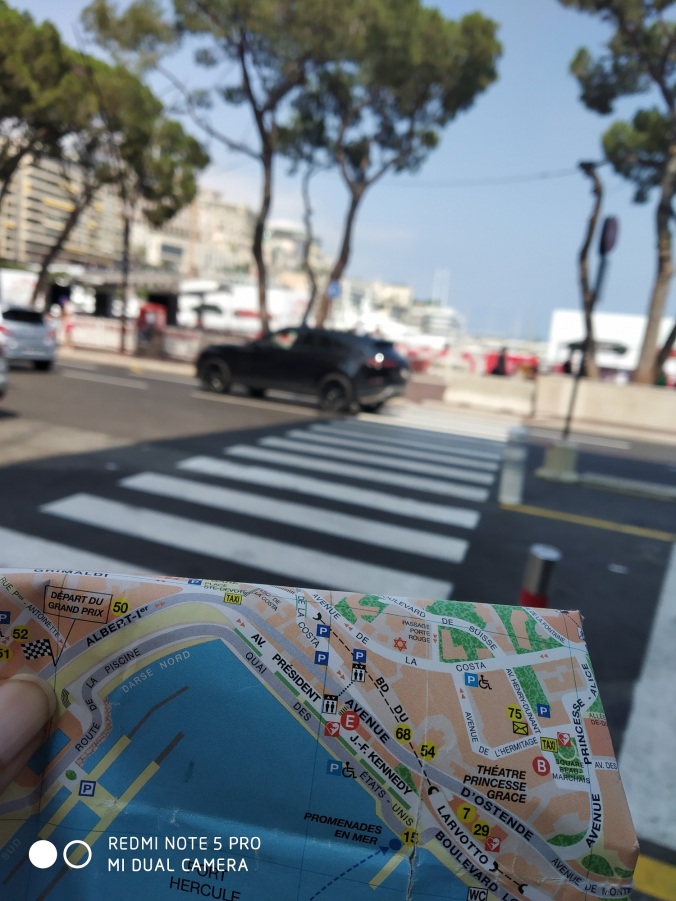 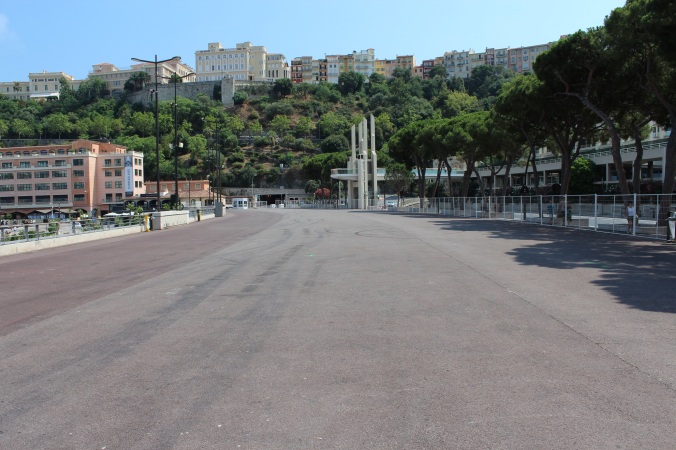 The heat was sucking out all our energy and the next stop in our plan involved an uphill climb via the tunnel to the hair pin bend and gardens. It was time for a pit stop for us to refuel and energize ourselves. While we are generally looking for a frugal meal, Monaco is not the place for anything frugal! As we later realised, the meal is frugal but the bill is not. For lunch we headed to the marina, restaurant Le Botticelli which has good views of the marina if you are lucky to get a place – we weren’t! So we found a place in the indoor section where we could see the people who were seeing the marina! On a day when the heat was unbearable – for two of us who are used to so much sun in India, we were sure we aren’t missing out on anything while being in the comforts of the shade and fan. 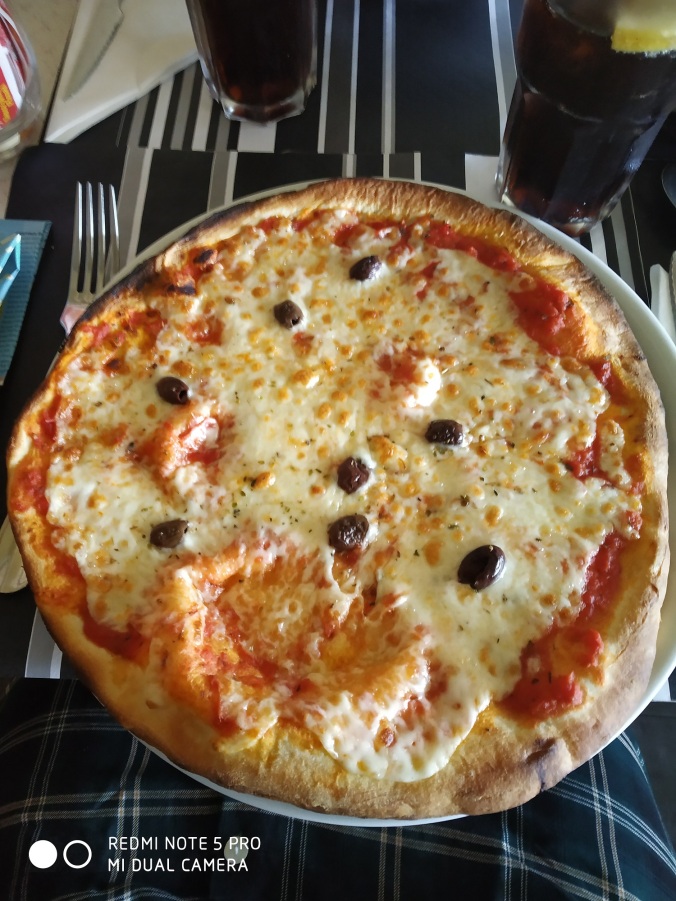 This Franco-Italian restaurant dished out some tasty pasta and pizza. I think they have the French attitude and Italian food and that is how it’s Franco – Italian. American Coke, French Attitude, Italian food and Monacan prices for the same later – we were back on our feet for the uphill task – literally and figuratively. The stores nearby offered variety of the fridge magnets and we bought one as is mandatory for us from each country and city we visit.

Google maps messed up again, so instead of going face to face with the tunnel, we saw it from an elevation. The scorching sun was no motivation to step back and take another road and climb up the distance again, so pictures clicked and back on the trail to Hotel Fairmont. Old style map reading skills came in handy with a sense of direction as we made our way to jardins de la petite afrique and Kleiner Park to walk in the shade provided by wonderful trees and then the flight of stairs down to the hairpin bend. TW (The wife) had no clue about the importance of this spot but her acting skills ensured that people who see the photograph would feel that she has seen more F1 races on TV than I ever have!

On the must see things in Monaco we had consciously skipped the palace and museum of Oceanography and ticked off everything else that we wanted to see. Should we wait for sun down or head back to Nice? Well we had a flight to catch that night, for tomorrow was another city, another country, another adventure and we headed back to Nice.

Someday – back for the race

We flew to Geneva that night, where thanks to the flight delay – missed the last public transport option and reached hotel in the wee hours before exploring Geneva and heading back to France to the picturesque town of Annecy in the French Alps or what is known as lake district area.

Monaco is gorgeous and glittering at night but if you want to stay here for a week could as well cost a kidney and a limb. Apparently Monaco is a year round destination but I would highly recommend not visiting in July – when we visited. While we generally dish out a list of things to carry for those who ask us about a particular destination, in case of Monaco – all I would say in things to carry is a lot of Euros!