Don’t miss the Stroopwafel in Amsterdam said one and all whenever we said we are going to Amsterdam. TW (The wife) & I were ecstatic with this news which meant that apart from Brussels, we had another place in the travel itinerary to try out the waffles.

A little digging into it and we realized that Stroopwafel literally means syrup waffle – two thin layers of baked dough with caramel like syrup in the middle. There began the search for the best Stroopwafel with most online resources directing us to Lanskroon – a canal side bakery, which we did not visit in the end, since we found the other gem while strolling along the Albert Cuyp market – the largest outdoor market in Netherlands.

The Original Stroopwafel cart with the miracle man – Ruud. First you smell it from a distance, then you notice the long line and then the sight of Uncle Ruud doling out freshly made Stroopwafels – yes, you have made your way to the right place.

Articles say that Ruud is now helped by his son and son-in-law, but on the day we visited, we were lucky to see Ruud doling out the amazing family recipe – with fans across the world. 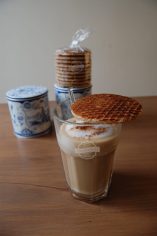 We asked if we could photograph him and he obliged, telling us about the recent shooting by a crew from Los Angeles for a TV series and how many others have done shows there. All this while continuing to prepare the stroopwafel on the side. We could not help but notice his bakers hands. 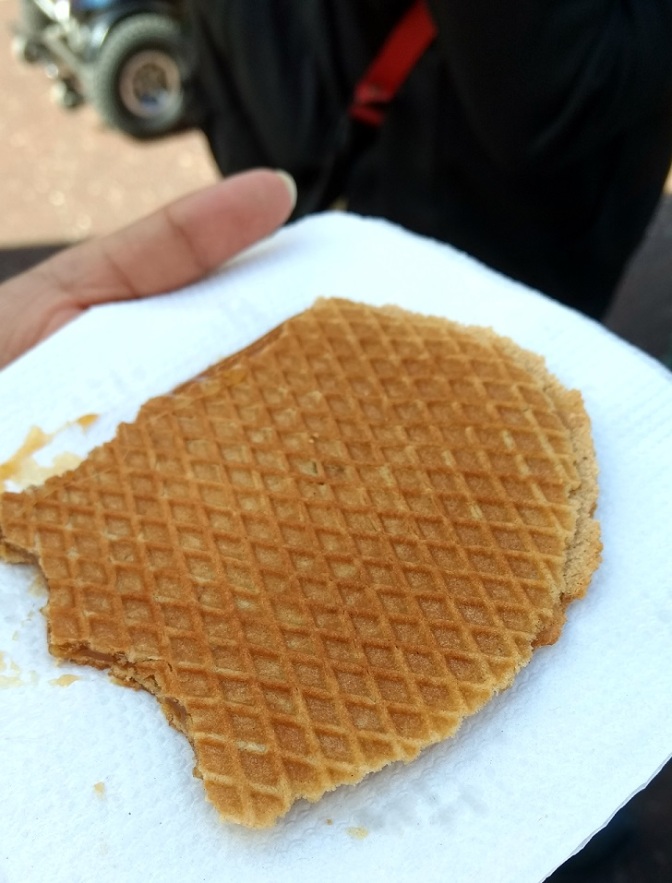 The menu was short & simple – two options, Chocolate or original. As we ordered one of each and Uncle Ruud got to working quickly on getting it done and handed it over with a kind warning – the syrup is still warm, hold it flat.

Crispy on the edge, soft on the center, gooey & chocolaty – the Stroopwafels were a marvel we discovered. What caught our eye was the dry stroopwafel which can be carried home & we managed to get it home without any breakage – thanks to NOT tagging out bag Fragile.

The next time you are in Amsterdam, use the efficient public transport system or just cycle your way to Uncle Ruud at Albert Cuyp market and get your share of Stroopwafel by joining the serpentine queue in front of this historical stall.

That leaves us wondering though, While the French, Italians, British and Belgians have marketed their food very well, the Dutch have been left far behind by not marketing their best kept secret – the stroopwafles.