The Wife (TW) & me, make it a point to visit Delhi during winters. On the agenda is Fog, Friends and Food. The nip in the air during the last days of December and most of January is a refreshing change from the weather in Maharashtra and it is always a great idea to meet few friends and acquaintances over some mouthwatering and delicious Delhi food.

A lot of joints get added and subtracted over the last visit. While this time we dropped Delhi Haat, replaced Natraj Chat Bhandar with Prabhu Chat at UPSC Bhawan, added Kachori at Jungbahadur and continued with Khan Chacha (For the heavenly Mutton Kakori and Mutton Seekh), Daulat ki Chaat & Jalebiwala, the highlight of the trip was the Afghani restaurant in Lajpat Nagar.

Research before the trip threw up some interesting new places to try and topmost amongst that was the strew of Afghani restaurants which have mushroomed in Lajpat Nagar. We zeroed in on Afghan Dabar (E-96, Lajpat Nagar-2) for trying out this new cuisine. With Afghanistan on the travel bucket list for a very long time and with every unfortunate news emitting from the country each week ensuring that it will be a tough task to go there, this is the best, we thought, we could get of Afghanistan.

Map of Afghanistan behind the cash counter

Located less than a kilometer from the Lajpat Nagar metro station (Violet Line), any cycle rickshaw would drop you there at about 20 rupees per seat. Apparently this lane is known as “Little Afghanistan” in New Delhi and it was easy to guess why. All the stores in the lane have signage in Urdu/Pashtuni/Dari in addition to Hindi and English and a lot of Afghanis who come to New Delhi for medical treatment stay in the vicinity.

The restaurant is easy to find with prominent facade & has a nice décor with the cash counter sporting a map of Afghanistan behind it and neatly lined up tables in a dimly lit place. The television keeps playing local Afghani channels is what we could figure out from the advertisements. There are two sections, one at ground level which has standard table and couch seating and another which is a few steps lower which has a Dastarkhan – seating on the floor. 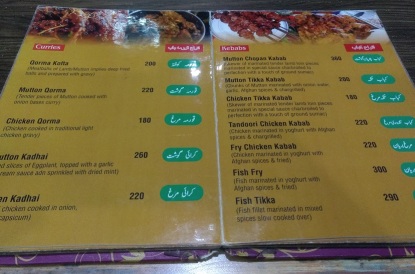 The place was clean and the service was fast and efficient. Every member of the staff looked Afghani.

With a large menu & not so large apetite, it was a tough choice to order. We tried the Chicken Qorma with Afghani Naan (one plate for Rs.20, serves two pieces). The chicken was delicious. Served in a medium sized bowl, it had a leg piece amongst few other pieces of tender chicken and the gravy without any artificial colors.

The Afghani naan – a little hard to break but very soft on the inside went well with the succulent and soft chicken and added texture to the gravy of the Qorma. Afghani Naan is made with a yeast kneaded dough with milk added to it. 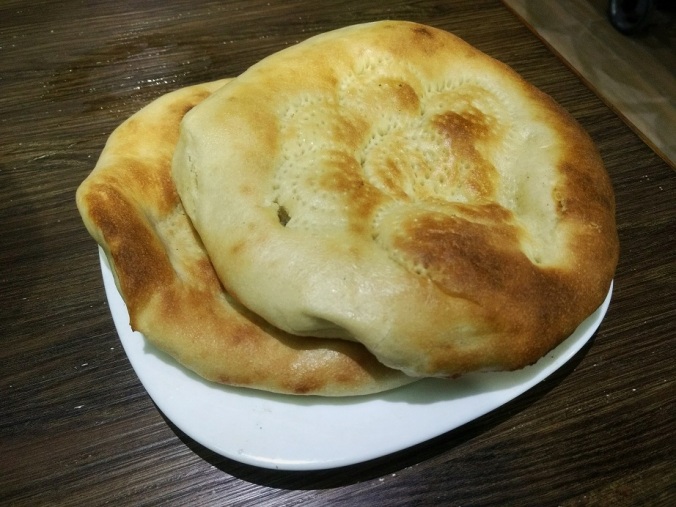 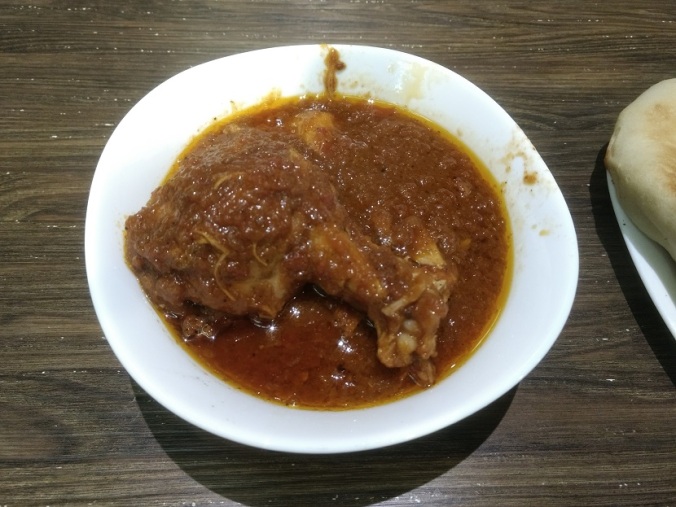 Afghani cuisine has been predominantly based on Wheat, Maize and Rice accompanied with local fruits and dry fruits. The famous dishes from the region (Qabuli Uzbeki, Qorma Chalao,Yakhni Murgh) are all available at Afghan Darbar and this will stay in the list for our next visit. The place is affordable. The Naans cost us Rs.20 & the Chicken Qorma is available for Rs.180.

How was Afghani cuisine different than the Mughlai food that we know off? Less spicy, more condiments but definitely flavorful and light for the pocket.

Next time ? Definitely, to try the Qabuli Uzbeki may be. . .