Spies, Dictators, Communism and aviation got me hooked to this subject trying to alternate between books from both sides of the divide. For every book I read about the Soviet Union, I marveled at how the people lived behind the Iron curtain and under the Iron fist!

When TW (The Wife) and I had the means to travel, the former Soviet Union was right there at the top of the list for me and thankfully TW did not mind! This took us to some very interesting places in former Soviet Union and those behind the iron curtain. From the time the Soviet Union collapsed till date, the choices which the leaders made, changed the future of each of these former soviet republics!

Our travels took us to some fascinating places – the Baltic states of Estonia, Latvia and Lithuania – which have moved far away from the USSR and are now part of European Union and NATO, have Euro as the common currency and are one of the most rapidly developing economies. We also visited Kazakhstan and Uzbekistan where getting a visa is a challenge and the country has seen only two leaders each since independence in 1991; to Russia – the anchor of USSR and to countries like Croatia and Montenegro which were behind the Iron curtain though not formally a part of Soviet Union.

The most interesting aspects of such travels have been hotels, especially those which have a soviet lineage. If there is one thing that is common for all – it’s their grandeur and probably the second thing (hopefully not anymore) ability to bug the rooms and spy upon!

The first experience was in Russia, in the beautiful city of St. Petersburg where we stayed at Hotel Azimut. The hotel was earlier known as Hotel Sovetskaya and is still the tallest building in the old part of the town. The hotel was built in 1967 and was the first high rise building in the once capital city of St. Petersburg. Did someone say Grand? The hotel has over 1000 rooms and we were somewhere on the 10th floor with some great views. While the air conditioner hardly worked, the windows opened, and we were happy for that.

One thing that we noticed was the presence of a loud speaker in the room and wondered why it would be present in the room, until one afternoon a loud announcement was made – in Russian. Both of us panicked. We opened the door to see if others are running. Paranoia set in, we went a floor down to see if our floor had no other guests, everything seemed normal everywhere. Lifts were working, no alarms were ringing, nothing! While TW called our friend – an Indian settled in SPB – as the city is fondly called, I opened the windows to peep out and see if people are running on the ground floor. Our friend said this is abnormal, but he doesn’t know what the announcement was! A call to reception did not help either since we spoke English, and the staff spoke Russian. In the end, we concluded no news is good news! The mystery remains unsolved.

The hotel was still stuck in Soviet era with a tourist office in the lobby and office of Aeroflot – the national airline. We stayed at this hotel in 2013. Online reports suggest that the hotel has undergone extensive renovations since then! 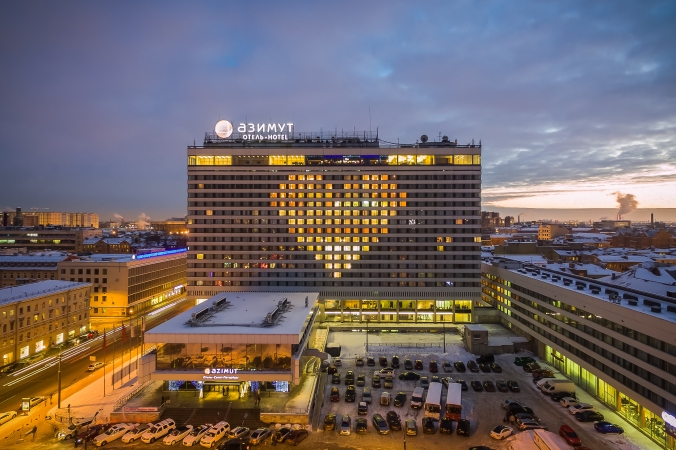 It took a while to return to the former Soviet Union but when it was time it was a visit to the Baltic States – the beautiful and serene countries of Estonia, Latvia and Lithuania. The soviets were ahead of the times when it came to design and construction and that is evident from how Hotel Viru is designed in Tallinn. The hotel had a secret KGB station between the topmost floor of the hotel and the terrace, which was used to spy upon the guests. The guests included distinguished personalities and head of states!

How the plates can be bugged – demonstration in progress

The secret KGB station is now a museum and open for public with pre-booking for a guided tour. The bugging devises which can be concealed in cutlery, under the table, corners in the room or even bathrooms look straight from a 1980s James Bond movie. One of the most interesting stories which the guide told was how a guest had complained to his companion about lack of soap in the bathroom and there was a knock on the door within minutes with the service staff handing over soap! SCARY! It was very difficult to believe that the hotel isn’t bugged anymore for the remainder of our stay.

While the hotel may be famous for KGB station, it stands on a prime piece of property – the tallest building around with view of the Baltic Sea and in our case – of the frozen Baltic sea, from the warmth of the room. The management has changed, the hotel is privatized but little else seems to have progressed – the décor, rooms, bar and a lot more looks like a set from soviet movies.

Hotel Kazakhstan is considered jewel of the country and the design has a crown on top of the hotel, which  presents a good photo op. Built in 1977, the building is earthquake proof and one of the top ten tallest buildings in Kazakhstan, even depicted on the currency note of the country. The hotel is a marvel of architecture. Each window and room designed in a way that it opens to either the magnificent hills or the vast expanse of the city.

From entry to check-out, we got a taste of what Soviet times were like! The sofa’s seemed like they are still in pre-1991 era. We were given a room on the 12th floor. We entered the room and it looked straight out of the museums we have seen in some other countries depicting life in Soviet Union! The thrilling point was during a sudden evening storm which hit the city. The locked windows just flung open with rain water gushing in the room, right on the bags which were placed next to the window. It took all our might to close the window and bolt it!

And while the experience at Hotel Uzbekistan is well documented before, (Read: Silk route diaries – O’zbekistan) there is something new we saw – the wedding troupes visiting Hotel Uzbekistan for a photo shoot. Agreed that the building as some unique architecture and that it was the most important hotel in the days of Uzbeki SSR, but with so many beautiful places around – why would someone want to take pictures with a non-descript tall and old building in the backdrop? Apparently, it’s the tradition! The building has been around for so long that generations have taken pictures with this backdrop and that must continue! 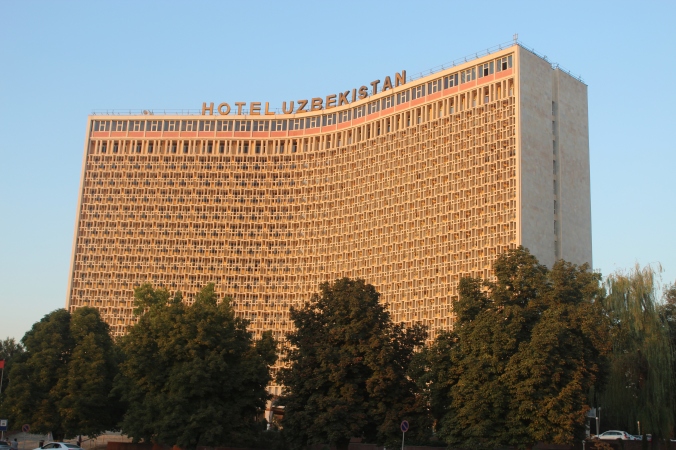 There have been a few common things in all these hotels – an old-style television set, wooden polished interiors, rooms which are in all shapes but rectangle, a mandatory table and sofa. I think these hotels will do better business by portraying their soviet roots and selling it as “experience” hotels than competing with other hotels.